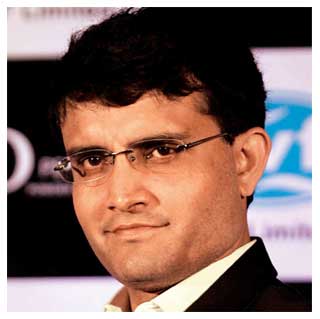 Sourav Chandidas Ganguly (born 8 July 1972), affectionately known as Dada, is a former Indian cricketer and captain of the Indian national team, Currently, he is appointed as the President of the Cricket Association of Bengal and President of the Editorial Board with Wisden India.

Sourav Ganguly is one of the four members of the Indian Premier League's Governing Council, responsible for all the functions of the tournament. He was appointed by Supreme Court in January 2016. He led India into the 2003 World Cup final, where they were defeated by Australia.

Dhoni Will Face Challenge Ahead With Retirements - Ganguly

BCCI suspends IPL till April 15 due to COVID-19 pandemic [+]
The 13th season of the marquee T20 tournament, was originally scheduled to begin on March 29.

First ODI abandoned without a ball bowled [+]
The first match of the T20I series between India and South Africa had also been rained off, at the same venue.

Hardik, Bhuvneshwar, Dhawan return for SA ODIs [+]
Rohit Sharma, who sustained a calf injury last month, does not feature in the squad.