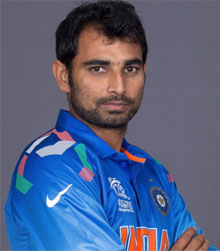 
Mohammed Shami (born 03-Sep-1990; Amroha, Uttar Pradesh) is a right-handed batsman and right-arm fast-medium bowler, who plays international cricket for India. He made his International debut in ODI against Pakistan at New Delhi on Jan 06, 2013.

Shami out of Afghan Test after failing fitness test