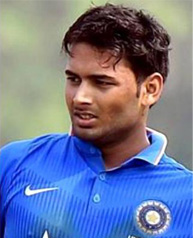 
Rishabh Rajendra Pant (born Oct 04, 1997, Haridwar) is a left-handed wicket keeper batsman, who plays international cricket for India. He made his International debut in T20I match against England at Bengaluru on Feb 01, 2017