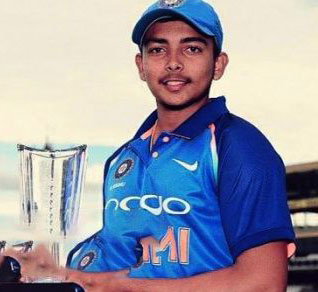 
Prithvi Shaw (born 9 November 1999 in Thane, Maharashtra) is a right hand batsman and right-arm offbreak bowler, who plays intternational match for India. He made his debut in Test match on 4-October-2018 against West Indies at Rajkot.

He was become the first Indians to scores hundres debut matches of Ranji Trophy, Duleep Trophy and Test match.

He was named captain of India's squad for the 2018 Under-19 Cricket World Cup. India won the tournament under his captaincy.

In November 2013 he had set the highest score by any batsman in any organised form of cricket since 1901 when he hit 546 in a Harris Shield elite division match until the record was surprassed by Pranav Dhanawade on 4 January 2016.

Delhi beat Kolkata in Super Over After Shaw 99

Prithvi Shaw out of first Test with ankle injury

Root, Bairstow ton put on 269 to flatten India [+]
England nonchalantly complete a record chase of 378 to beat India in rapid time on the final morning of the fifth Test at Edgbaston.

Brilliant England eye sensational win over India [+]
At the end of the forth day, England score read 259/3, with Root (76*) and Bairstow (72*) standing tall.

India in control over England despite Bairstow ton [+]
India remain in a dominant position in the fifth Test against England despite another superb century from Jonny Bairstow on day three at Edgbaston.

Pant and Jadeja go full amazeballs to rescue India [+]
Wicketkeeper hits 146, allrounder unbeaten on 83 after coming together at 98 for 5

Rohit will be leading the side in both series [+]
India announces squads for T20I, ODI series against England for the three-match T20I and ODI series.