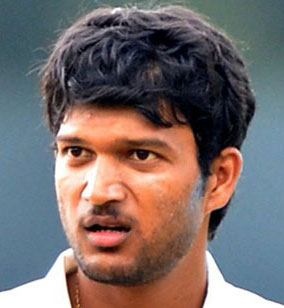 
Navdeep Saini (born 23-Nov-1992; Karnal, Haryana) is a right-handed batsman and right-arm -medium bowler. On 11 June 2018, he was added to India's Test squad for their one-off match against Afghanistan as a replacement for Mohammed Shami. He made his international debut in T20 International against West Indies at Central Broward Regional Park Stadium Turf Ground, Lauderhill on August 3, 2019 and he declared man of the match in debut game.

Rain washes out Hamilton ODI after stop-start [+]
However, the hosts gained crucial Super League points to rise to No.3 on the table.

Suryakumar century sets up India win over New Zealand [+]
Suryakumar Yadav hits an unbeaten 111 off 51 balls as India hammer New Zealand to take a 1-0 lead in the three-match Twenty20 series.

Hales, Buttler put on a show as England cruise into finals [+]
India thrashed by ten wickets after batters score only 168 in Adelaide