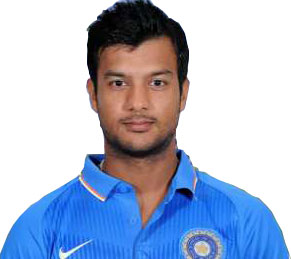 
Mayank Anurag Agarwal (born 16-Feb-1991; Bangalore, Karnataka) is a right-handed opening batsman, who plays international cricket for India. He made his international debut in Test match against Australia at Melbourne Cricket Ground during Boxing Day Test on Dec. 26, 2018.

A Karnataka batsman, Mayank has also represented India at the Under-19 level. He averages 41 runs in the five games that he has played in the shortest format of the game. He was one of the stars of the India Under-19 side that went to Australia in 2009.

Kohli steps down as Indian Test captain [+]
Virat Kohli on Saturday announced that he is stepping down as the captain of the Indian Test team.