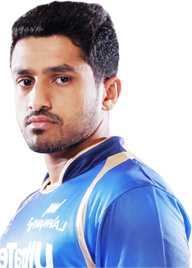 BCCI suspends IPL till April 15 due to COVID-19 pandemic [+]
The 13th season of the marquee T20 tournament, was originally scheduled to begin on March 29.

First ODI abandoned without a ball bowled [+]
The first match of the T20I series between India and South Africa had also been rained off, at the same venue.

Hardik, Bhuvneshwar, Dhawan return for SA ODIs [+]
Rohit Sharma, who sustained a calf injury last month, does not feature in the squad.