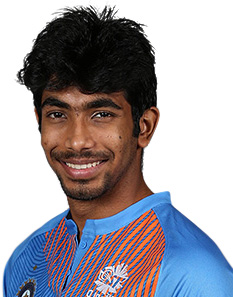 
Jasprit Bumrah (born 6 December 1993 in Ahmedabad, Gujarat) is an Indian cricketer who plays as a right-arm fast-medium for the Indian national cricket team. Considered as a Yorker specialist, Bumrah has the ability to bowl accurate Yorkers in the death overs.

Bumrah made his T20I debut on 27 January 2016 against Australia. He holds the record for maximum wickets (28) in Twenty20 International in a calendar year.

He hold the record for most wickets (15) by a fast bowler in a five-match bilateral ODI series.The previous record was held by Clint McKay who picked up 14 against Pakistan in 2010 and Adam against India.